A wave of arrests came after the 'Scummit' of Heads of State of the Latin American/Caribbean and European Union in Guadalajara, Mexico on May 26-29th.

Comprehensive global coverage is in Español thru Mexico Indymedia. Cleveland Indymedia has a Newswire story in English and there is an English translation of the most widespread Indymedia account on UK Indymedia.

There is a great photo gallery from movement sources and another good one from the BBC. 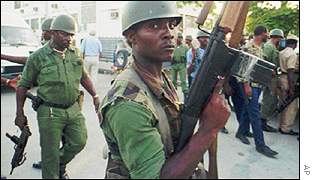 Corporate media and the Bush administration would have people believe that the recent revolt in Haiti was the work of oppressed citizens fighting for independence. Documentation of US "involvement" in Haiti, however, tells a different story.

Jean-Bertrand Aristide, the democratically elected president of Haiti since 1990, has faced US pressure to resign since the Clinton administration. Haiti, one of the world's poorest nations, currently suffers a US embargo of $500 million foreign aid. Previous US involvement also includes support for dictatorial regimes and efforts to prevent a higher minimum wage.

The opposition, described by the corporate media as "freedom fighters", are actually a US sponsored ruthless and brutal militia, many of whom were involved in the US-backed death squads of the 1991-1994 coup attempt. Louis Jodel Chamblain, a former leader in the FRAPH paramilitary death squad, Guy Philippe, former Haitian police chief, and others were trained in Ecuador by US Special Forces during the previous coup. Many people view Haiti as simply one more example of an illegal CIA orchestrated coup, as it has does so often before. Not surprisingly, these "rebel leaders" have established relationships with Colin Powell and George W. Bush throughout the years.

Unfortunately for the people of Haiti, these paramilitary coup attempts also have disasterous consequences on the nation's poor, and only promise future dictatorial regimes.

Washington has been working closely with corporate media sources to distort the coup, downplaying US involvement. Among these distortions include the claim Aristide recently "stepped down" from the presidency, while the reality is that he was forcibly kidnapped and is being detained by the US government.

Read more articles detailing the truth about Haiti at:

For the past several weeks, a protest that has grown into thousands has ensued throughout Bolivia in reaction to the former President Sanchez de Lozada's ("El Goni") decision to open the nation's natural gas resources to multinational corporations. In the face of protesters demanding his resignation, the president has recently stepped down. Although the most intense protests, consisting of strikes, barricades, and military resistance, were located in El Alto, the fighting has intensified in La Paz, where strikers have frozen the economy. The resistance, which has grown from miners to a national revolt, has faced a brutal military crackdown, resulting in the murder of over 50 protesters and civilians so far.

CAUTION! You are leaving the democratic sector for the Gorleben police state!

Rage and mourning across Germany

American ISM activist killed by Israeli Bulldozer
Activist Rachel Corrie, in Gaza as part of international protests against the Israeli occupation of Palestinian territory, died as a result of injuries sustained when she was run over by an Israeli bulldozer in the Rafah refugee camp. Corrie was part of a group of International Solidarity Movement activists attempting to stop Israeli forces from bulldozing Palestinian homes. While many Palestinians are killed by occupation forces every week, Corrie is the first international working with the ISM to have been killed during the conflict. One Palestinian man in Rafah and an adolescent in Khan Yunis were killed as well.

On March 1st Rachel helped compile a report on women's non-violent resistance to the Israeli Occupation. In the US Rachel worked with Olympia Movement for Peace and Justice. Starhawk, who is also in Palestine with the ISM, has writen a short call to action in response to Rachel's killing.

Local Note: Chris Fox, a Kent State graduate and member of the Burning River Collective in Cleveland, visited Palestine in December and January with the International Solidarity Movement. To learn more about his experiences with ISM in Palestine you can read his updates which were posted to Cleveland IMC.

NE Ohio Activist Visits Palestine
Chris Fox, a Kent State graduate and member of the Burning River Collective in Cleveland, visited Palestine in December and January with the International Solidarity Movement. The goal of ISM is to do nonviolent civil disobedience to help end the oppression of the Palestinian people by the Israeli Government.

There was a showing of the film "Palestine is Still the Issue" Jan. 11th, click here for more info about the event, and here for a review of the film and discussion that followed it.

The Mexican State of Chihuahua is the most dangerous place to be a young woman in the Americas. In the last ten years, in the city of Juarez alone, some 268 women have been murdered and at least 250 more have disappeared. These women have perished in brutal circumstances that include sexual assault, torture, and mutilation. This phenomenon reached Chihuahua City in 1999. This horrifying wave of violence against women is unprecedented in Mexico and Latin America.

The actions of the Mexican authorities in response to these crimes have been ineffectual. Existing laws have not been upheld. Legislation dealing with sexual violence and disappearance is sorely needed. False evidence and false accusations of guilt flaw too many investigations. The murders and disappearances have been carried out by many different perpetrators, but a generalized atmosphere of impunity facilitates all of them. The right to life, to live in safety, to due process and to justice has all been violated time after time.

For several years, the families of the victims have led scores of protests against the violence and against the failures of the authorities to respond adequately and protect the citizenry. JUSTICE FOR OUR DAUGHTERS was formed in 2002 in Chihuahua City. It is a group made up of families of the victims and their legal advocates and supporters. They struggle for justice and human rights in Mexico. They call for attention to the needs of Mexico's growing population of young working women. They demand an end to stigmatizing of women who need to work outside their homes to support themselves and their families. They demand the creation of new laws to promote public safety, proper legal management of missing person cases, and scientifically accurate identification of human remains. They also rightfully demand that any representative of state authority who does not fulfill his or her duty to uphold the law and protect the Mexican citizenry should be held accountable and punished.

If the Mexican authorities fail to uphold internationally recognized standards of human rights, then the Mexican State is also responsible for the perpetuation of these crimes and should be subject to sanction from the international community. The fact that disappearance is not a crime in Mexico cannot serve as rationale for ignoring the escalating violence against women in Chihuahua.

Unfortunately, the families of the victims and their supporters have been subjected to repression carried out by agents of the Mexican State. For demanding justice, for exercising their right to freedom of expression and for seeking support from the international human rights community, they have been harassed, beaten, tortured, publicly defamed, falsely accused of crimes and arrested.